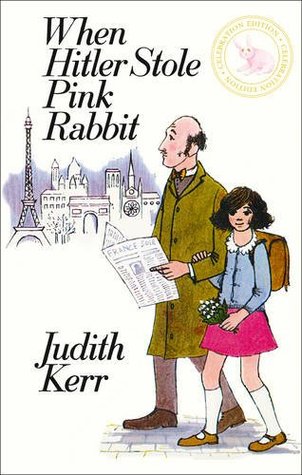 I first read When Hitler Stole Pink Rabbit when I was about nine years old. It was one of several novels I read about similar subjects – my interest was sparked, in part, because my family is German. My grandparents all lived through the war years (they moved to Australia in the 1950s); sadly, I know little about their experiences – it was simply not talked about much. I do know that moving to Australia was not easy for them in many ways, ranging from prejudice to missing the ones they left behind. But I digress … I suppose when I read When Hitler Stole Pink Rabbit then, it was because I felt that in some way it connected me to my family. I’ve never forgotten the book, so when it came to my attention recently, I jumped at the chance to read it again. I was surprised by how much I remembered.

Childhood is confusing at the best of times. Imagine what it was like for nine-year-old Anna back in 1933. Everything was changing in her country and it was hard to keep up. One day she was playing with friends, the next she was leaving the country to live in Switzerland, leaving behind home, friends and precious toys, including her pink rabbit. Her parents told her it was too dangerous for some people to live in Germany – one of them was her father, a journalist with Jewish ancestry, so they had to leave before it was too late. Too late for what? Who was this Adolf Hitler, the man they said was behind it all? Why did he hate them so much? And what did he want with her pink rabbit?

When Hitler Stole Pink Rabbit follows Anna and her family as they flee Germany, settle in Paris and later move to war-torn London. Based on real events in the author’s life, the novel is well targeted at children aged 9-11, but would also suit early teenagers. It taps into this age group’s growing awareness of the world and justice without bombarding them with too much information. It hasn’t been “dumbed down” either. Miss Attitude, 11, has read the first few chapters and is keen to keep reading – when there is so much opposition from anime, graphic novels and mass-produced series, this is high praise.

Despite the seriousness of the events, there are moments of warm humour that lift the novel from what could be come a mire of questions, confusion and darkness. This humour mirrors the childlike abililty to see the bright side – an ability which fades as people mature. It’s beautifully done. Earning the title “modern children’s classic” is no mean feat, but it’s so well-deserved in this case. A highly recommended read.

Available from good bookstores. This copy was courtesy of Harper Collins Publishers Australia and was part of a 40th anniversary edition also containing the sequel Bombs on Aunt Dainty (previously published as The Other Way Round.) 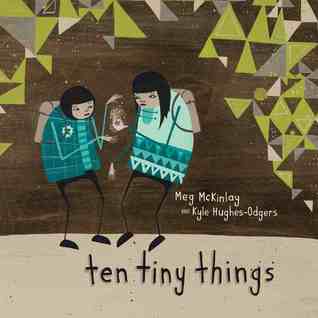 “It was a red thing. It was a sparkly thing. It was a tiny, tiny thing.”The earthy tones of the cover hint at the environmentally-conscious message contained in Ten Tiny Things, a charming new picture book by Meg McKinlay and illustrated by Kyle Hughes-Odgers that’s sure to attract plenty of young fans.

The story has a pleasing simplicity. Every day Tessa and Zachary ride in their “swift and splendiferous” machine to school. But when then machine breaks down they have to walk to school, huffing and puffing along the hot, hilly journey. Just when they think they can’t make it, Tessa notices something…and so begins a journey of discovery as the children find things they had never noticed when their machine whizzed past.

I wish my children were ten years younger so I could read them this book. Not only does it look fantastic, with inspired and almost gothic-looking illustrations by Hughes-Odgers, but it reads so well. McKinlay’s use of alliteration complements the simplicity of the language – as I read the book aloud, the words rolled off my tongue with ease. Simply put, it’s beautifully written. It’s a winning combination.

The theme is timely and cleverly delivered through words and images – I liked the author note at the end about the game McKinlay devised for her daughter called “Things We Would Never Have Seen If We Had Been Driving”. As a parent, you often need to be inventive to encourage children to walk instead of drive, so I can see this book being used as a prompt by environmentally-conscious parents…”Let’s see if we can find ten tiny things while we walk to school”.

I loved everything about this book and I’m planning to read it at my next story time session. I think they’ll love it as much as I do. 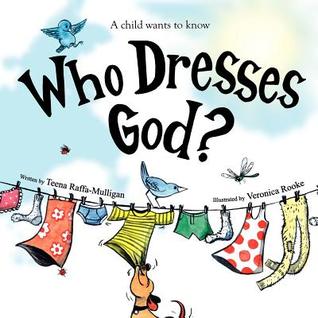 Inspired by author Teena Raffa-Mulligan’s younger daughter, Who Dresses God? is a  gentle story featuring a conversation about God between a mother and a child on the way to Kindergarten.

Told from the child’s perspective, the series of questions and answers in rhyme introduces young children to the idea of a higher being that can see, hear and speak without eyes, ears or tongue, and does not live in a house with roof, walls and locking doors. It’s sensitively written without moralising or forcing any particular religious belief, but with plenty of heart.

“…For God’s house is this world we share and God is in it everywhere.”

From the moment I saw the cover of this book, I was in love with it. It’s captivating from the engaging narrative to the delightfully whimsical illustrations. From a design perspective, it’s exactly the kind of book I would have picked up to read my children when they were younger – the illustrations complement the text perfectly. The author and illustrator are friends (and neighbours) who clearly work well together; Rooke has done Raffa-Mulligan’s text justice times ten, capturing the sweet innocence of the child’s questions with respect and vision.

Parents will relate to this because they’ve all been caught out with hard questions; children will be drawn to the simple, touching rhymes and captivating illustrations. I love it, and my guess is children will too.

Who Dresses God? is available from MBS Press or Amazon. This copy was a gift from the author. 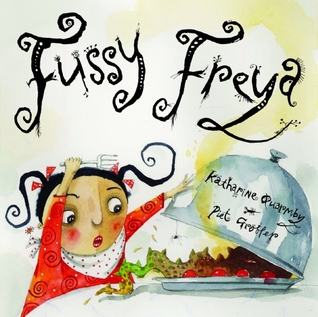 Any parent who has a fussy eater is sure to love Fussy Freya, a beautifully illustrated picture book about a little girl who won’t eat her dinner – but she doesn’t mind: “not a little, not a jot”.Freya has always been a good, no, “brilliant”, eater until one day she turns her nose up at her mother’s dhal and jasmine rice. Things quickly get worse as she sulks, roars and throws her food until her desperate mother calls on Grandma Clare for help.

The snappy rhymes and quirky, eye-catching illustrations make Fussy Freya a charming and enjoyable read for pre-school children. I read it to a five year old just before writing this review and she was captivated from start to finish; her eyes widened when she heard Grandma Clare’s innovative tactics.

I particularly liked the multicultural aspect, which adds a little ‘food’ for thought (pardon the pun): Freya comes from a biracial family and the food she eats (or refuses to eat) reflects her ancestry – from bacon and baked beans to dhal. It could make an interesting discussion with children about the foods they eat.

Overall, this book is a winner – I just wish the fussy 14-year-old at home was so easily fixed.

THIS week Australian parents are heaving a big sigh of relief. After nearly two months off, it’s back to school time, and my Facebook news feed showed that many parents were enjoying the quiet. Except for the parents whose beloved bubs are off to school for the first time … they probably held back sobs until they got home.

The return of school time is a great time to reinforce or introduce an important safety message to young ones – stranger danger. And what better way than with Jimbo! Don’t Go!, a delightfully illustrated book that uses catchy rhymes to get the message across in a positive way.

Jimbo is walking home from school when a tiger offers him a ride, saying he is a family friend…and he has chocolate, too. It’s a tempting offer, but Jimbo’s mother has told him never to go with strangers. What will Jimbo do?

It’s a terrific interactive story that promises a rewarding reading experience. A must for pre-schools and junior primary, day care centres, libraries and parents of young children.

Available from http://firsteditionbooks.com.au/bookpages/210008.html This copy was courtesy of Teena Raffa-Mulligan.