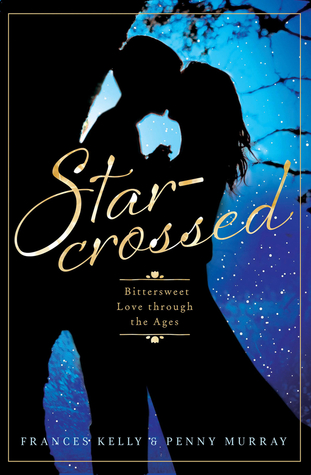 “Why do we love to read, watch and hear stories about unfulfilled love or parted lovers?” That’s the question authors Frances Kelly and Penny Murray ask in their introduction to Star-crossed: 18 tales of bittersweet love. They suggest that it’s our innate longing and desire for things (often unfulfilled) that makes such stories so compelling. As they found when deciding which stories to include, the star-crossed lovers theme is pervasive across cultures, time and ages.

After reading the introduction, I asked myself which love stories (fiction or real life) have inspired me over the years. For me, it’s hard to pinpoint just one – predictably, I loved the chemistry with Scarlett and Rhett, Mr Darcy and Elizabeth Bennett, Mr Rochester and Jane Eyre and Westley and Buttercup from The Princess Bride. More recently, I’ve been drawn to the love triangles of Katniss, Peeta and Gale in The Hunger Games and I confess to being caught up in the drama of Matthew and Mary Crawley’s courtship in TV series Downton Abbey. Would any of these feature in this compilation? As it turned out, only one of mine did.

The authors narrowed down an extensive list and ended up with just 18 short and sweet (or bittersweet) imaginatively retold tales from myth, history and fiction; stories that have inspired countless authors, fictional characters and women of all ages worldwide. Some bring out all those melting, swooning, heart-fluttering feelings in the romantics of the world (Johnny Cash and June Carter). They’re the ones that make you say “Awwwww”. Others are on the sadder side – couples forced apart by death (Romeo and Juliet, John Keats and Fanny Brawne) or circumstance (Abelard and Heloise), or stories of unrequited love (Sir Lancelot and Elaine). These are the “Ohhhhh” stories. And then there are the feisty stories of hot and cold lovers (Elizabeth Taylor and Richard Burton) – the ones that stir up the passion.

Aimed at the teenage/young adult market, the retellings are simple but heartfelt. All have a different voice – sometimes the voices of the lovers (Abelard and Heloise through letters to each other), sometimes a narrator speaking almost conversationally. Each one fits the story well – the story of Johnny Cash and June Carter reads like a grandmother talking to a much younger woman: “Well, let me tell you honey, it sure is a good thing Mr Right don’t come along every day.” Each story is allowed a life of its own and readers are bound to be drawn to certain stories for reasons only they know.

I enjoyed this – it satisfied my romantic side quite nicely. Available from good bookstores and Random House. This copy was courtesy of Random House.

When my 15-year-old niece saw my film tie-in version of The Perks of Being a Wallflower she was thrilled: “I can’t wait to see this movie, it looks soooooo good,” she exclaimed, and snatched the book away. First released in 1999, the book is often compared to iconic American novel, The Catcher in the Rye (J.D. Salinger), in part because of common themes like teenage angst, alienation and rebellion. The depiction of these themes in The Perks of Being a Wallflower has been the subject of controversy (calls have been made to ban the book in school libraries) because of frequent references to sex, drugs and homosexuality. Right. And that’s going to stop teens reading it. I don’t think so.

There are some people who love the limelight (or it loves them) and others who stand on the sidelines. Fifteen-year-old Charlie is a “wallflower”, a kid who doesn’t stand out but stands back. The high-school freshman is not popular, but he’s not despised either; in truth, he probably represents a good proportion of the kids in any run-of-the-mill high school (well, maybe a little more articulate). Charlie reveals himself to the reader through letters to an anonymous friend; his letters are by turn intimate, bittersweet, funny and touching, giving the reader a far deeper insight into his character than his friends and peers would have (they see him as shy, awkward and somewhat weak).

In addition to dealing with familiar adolescent struggles such as making friends, crushes, first dates, experimenting with drugs, alcohol, smoking and sexuality, and family dramas, Charlie is trying to make sense of his best friend’s suicide and a shocking realisation about  his aunt. He’s realising that his parents are flawed and that the world is not fair. No longer a child, not yet an adult, Charlie is viewing the world through changing eyes, and he’s not sure he’s ready for reality – or for stepping away from the sidelines and onto the playing field. Do you remember that time of your life? Whether it was a defining moment or a gradual slide into adulthood, it happened. For Charlie, writing these letters/confessions achieves a dual purpose: it helps him make sense of his world (and the world) and it makes him feel as though someone is listening to him. It’s a bit hard to be heard when you’re on the sidelines.

On the surface this is a simple and short coming-of-age novel, but really, it’s much more than that. Charlie’s voice is so real, so right for his age; it doesn’t sound like an adult trying to remember being a teenager, which it could so easily be. The issues of teen sex and pregnancy, alcohol, drug and sexual experimentation are, like it or not, a fact of life for most teenagers in some form; I didn’t feel that these issues were glorified. Instead, they were coupled with issues including domestic violence, abuse, anxiety and depression in a realistic and sensitive way.

I really liked Charlie as a character; his vulnerability was endearing. He made mistakes but he wasn’t an arrogant, know-it-all kid. He really epitomised the fragility of adolescence – as a mother, I just want to give him a hug. And since I come from the age of mix-tapes, I’d love a mix tape from Charlie; I think he’d make me a good mix. I wish more teachers could be like Bill; he reminded me of Prof. Keating in Dead Poet’s Society. I also enjoyed the sibling relationship between Charlie and his sister; their closeness was believable and almost enviable.

I really enjoyed this “blast from the past” – I liked its dark poignancy in particular. I hope those who see the movie make a point to read the book first!

Available from good bookstores. This copy was courtesy of Simon & Schuster.

Back when I was 13 I saved up to buy Smash Hits, a popular music magazine that everybody was reading. Like, everyone. What I really wanted was the poster of a famous pop star (OK, so it was George Michael and I wanted him stuck on my wall so I could gaze at him adoringly). Unfortunately Mum was not impressed because George was shirtless and promptly confiscated my treasure. I was devastated and convinced she only wanted the picture so she could stare at him adoringly. It took a bit of hunting, but I finally found that poster. Sadly, by then someone had let on that George was not into women (which I refused to believe – I saw the video for Careless Whisper and there were plenty of girls in that and they were all over George). My point is that I was not immune to crushes on celebrities – which is what Wendy Harmer’s latest teen novel is all about.

If anyone knew what Elly Pickering knew, they would just die. Like, really! Elly has been trusted with a secret soooo big that she might explode with excitement. Jake Blake, teen sensation and movie heart-throb, is coming to her school (OMG!) to film Monster Class 3 (OMG!!). She knows this because her mum is doing PR for the movie. And Elly’s pretty sure that means she’ll get special treatment – maybe even a role in the film? Awesome!

But things go wrong right from the start. Thanks to a stuff-up involving a car, a red handbag and the paparazzi, Elly is sacked from her assistant role and banished to the set canteen. Instead of looking sassy, she’s sweaty (embarrassment, much). Her boyfriend Will couldn’t be less interested (jealous, much?) and her sister is making her pass notes to Jake (poetry, how lame). Worse still, her mum seems intent on ruining her life, her best friend (in town for a holiday) gets a part as an extra and Elly misses out and Carmelita seems more interested in catching up with bitchy Bianca. Could life suck any more? Apparently, yes.

I Made Lattes for a Love God is a light, warm teen read that takes readers (if they’re ancient like me) back down memory lane – back to the days when meeting a celebrity crush was nearly every teen girl’s dream come true (and when taking someone’s George Michael poster was just not on, Mum). It’s a quick, easy read with a funny, engaging character who is easy to like and sympathise with, but it’s definitely one for the teens. It’s not particularly deep – the novel glosses over a couple of deeper issues (such as parents separating) – but it gives a good representation of a teenager’s muddled-up headspace.