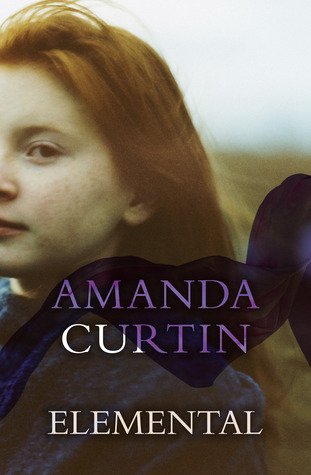 Oh Coop. I love your grandmother.

With these heartfelt words, a young female character called Avril summed up how I felt about Meggie Duthie Tulloch, the main protagonist in Amanda Curtin's arresting novel, Elemental. I read this book ahead of a Stories on Stage event with the author and fellow writer Ian Reid (That Untravelled World) and, at the event, found it hard to convey what I thought without gushing (I was still in that "wow" moment you have when you've finished a really good book). Elemental is an astonishing book, in both the tale and its telling.

It has taken a lifetime for me to see that the more afraid people are of the darkness, the further into it they will flee.

Meggie Tulloch has a story to tell. Her life has been full of challenge, heartache and sheer hard work, often as harsh as the wind and water that battered the coastline of her childhood; her determination and strong spirit has helped her make a life out of the elements she has been given. Late in life she chooses to write her life story for her grand-daughter Laura in exercise books (which are uncovered years after her death in the 1970s); Meggie's story, divided into three parts (Water, Air and Earth) takes the reader from the "top of the world" in coastal Scotland to Fremantle, Western Australia, covering the period 1891-1932. The final section, Fire, reflects on Laura and her daughter-in-law's reaction to reading the notebooks while Laura's son Cooper recovers from horrific burn injuries. Meggie was born in a place and time where women and girls ranked low in the order of things; girls were born to do the bidding of men and Curtin provides some detailed and thought-provoking insight into the role of women in fishing villages like Meggie's birthplace. Girls' lives were mapped out for them; from a young age they were in "training", fetching and carrying for their brothers and fathers at sea, cleaning, knitting - being "Good daughters who would become good fishwives". Relating this, Meggie was matter-of-fact: "It was just the way life was." If being born female wasn't enough, Meggie's red hair also worked against her, fostering superstition and suspicion. I was horrified to read that women "floated" their men and their gear out to sea - carrying them on their backs so the men would be fit and have dry sea boots; unlike me, Meggie did not recall this with horror, but vowed she would never carry a man on her back. The winds of change in women's roles had started to whisper into her small village: Meggie's sister Kitty vowed never to marry (which Meggie thought was a foolish thought and a grand dream at once) and left the village to be a gutting girl, and Meggie, following her sister's lead, later did the same but never returned. The outcomes for both had their share of tragedy and triumph. Meggie continues to push for change, if only in her own life, by working while married (by this time she is in Fremantle) and putting off children; it's probably more about having a say about her life, rather than pushing for change on a bigger scale. The role of women is further explored through the advent of World War I and the post-war impacts on men, physically and mentally. Meggie was among many who had to be the "strong" one; she may not have been the official head of the household,  but that's what she was. The water, air, earth, fire elements are beautifully conveyed in Elemental, particularly in respect to the novel's atmospheric aspect. The descriptions of the places Meggie lives in are poetic and so alive they leap into your consciousness and burn an image or feeling; Curtin writes of the "stinging salt", "Arctic winds whipping them into a freeze", the "jangle and glare" of Fremantle's endless blue sky and the night sky "warming into day, all pastel watercolours, pink and indigo, god-gilded". Metaphorically, the elements are a great conversation point - consider the water of life, winds of change, cleansing power of fire, and so on ... book clubs will love that. Meggie's personality is a portrait of the water, air, earth, fire elements: she is emotional and feels deeply (readers will note that there are some aspects of her story that are hinted at, but not fully explored immediately because it hurts too much), she is a breath of fresh air riding on the winds of change, she's grounded in reality, and she has a burning desire to make something of her life (while realising that you can never fully forget what sparked it).

I kiss the air. It spins around me with the rush of something new ... and suddenly I know that I will never be the same again because I have felt freedom in my lungs. (p103)

As you can see, Elemental really struck a chord for me. Meggie's story made my heart ache; a certain scene found me with silent tears rolling down my face and I had to put the book down and absorb what I had read. The historical aspects fascinated and inspired me (I had to look up more information about gutting/herring girls or quines) and living in Perth there was a lovely sense of familiarity in certain descriptions; Curtin's writing astonished and delighted me. It's an exquisite book. Saying goodbye to Meggie was hard, but I'll read this book again (just flicking through it now makes me want to find a reading nook), and I'm sure other readers will feel the same.  Click here for book club notes. To read an extract, click here. Available from good bookstores and UWA Publishing. This copy was courtesy of UWA Publishing. Bookish treat: Lemon slice. Sweet, tangy and zesty. I made some for the Stories on Stage event. Photos of the event, not the slice, are below.