Cameron Raynes grew up in Perth, the most remote capital city in the world. At 25, armed with a degree in Philosophy and Anthropology, he was sent to the edge of the Great Western Desert as a welfare worker. Three years later Cameron was in Darwin, doing a PhD. Since then he has worked as an anthropologist, house dad, archivist, editor, copywriter and academic. The author of The Last Protector and The Colour of Kerosene, Cameron now lives in Semaphore, a place more like a small coastal town than a suburb of Adelaide, and teaches Aboriginal history at the University of South Australia.

In 2008, Cameron won the Josephine Ulrick Literary Prize, at the time the richest in the world for a single short story. That story — ‘The Colour of Kerosene’ — became a short film in 2012. It was shown at the St Kilda Film Festival, the Shorts Film Festival, and the Barossa Film Festival, where it won Best Australian Film. First Person Shooter (to be released February 2016) takes up where the short film left off, on the outskirts of a small country town in decline. An Australian gothic tale. You can find out more at his website or on Facebook.

My debut novel, First Person Shooter, began life as a script for a feature film – a story that was darkly humorous, violent and with more than a few nods to the country-influenced gothic sensibility of Flannery O’Connor’s work. It became, however, a very personal project – a novel born of deep personal frustration and shame. 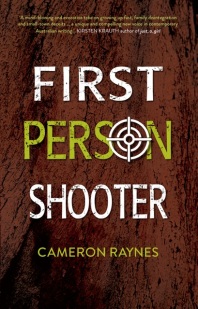 In early 2013, during the first draft of the novel, I realised that the story had to be told from the point of view of one of the minor characters of the script – a 15-year-old boy called Jayden. This boy would be the centre around which I could build a story. Jayden would live on the edge of a small country town with his emotionally distant, injured father. He’d be coming out of an addiction to online gaming, mainly first person shooters. He’d be caught with ammunition at school and suspended for a day. His best friend, Shannon, would live with her sister on a nearby farm, waiting for the return of their mother from prison. And the son of the man her mother had shot would also return, seeking revenge. There’d be bikies, drugs, a turf war.

Enough, you might think, to create a protagonist, a story and the obstacles, dilemmas and choices that would reveal his character. But I wanted more. I wanted a way into Jayden’s inner world, his self-talk, and here’s where the personal, the frustration, and the shame came in. I gave Jayden a stutter.

I’ve stuttered since I could talk. My school days were blighted by the horror of being called on to speak – to do the thing that made me feel ugly and monstrous – and to do so in front of my peers. While I hid the stutter and the pain it caused as best I could, and functioned reasonably well into my twenties and thirties, things fell apart for me in my early forties, forcing me to rethink how I related to myself and to the world.

So, as if Jayden hasn’t got enough to deal with – bikies, bullies, a love he can’t express because of the shame he feels, an absent father, the terminal illness of his beloved dog, a psychopath wanting to kill his best friend – he also has to give a presentation to his English class. Stupidly, perhaps, that’s probably the thing that terrifies him most.

It took a while for me to commit to this exploration of stuttering. I knew I’d have to tap into my experience as a stutterer. And if I was to do it properly, nothing could be off-limits. This was very confronting at first, but then became energising, giving my work a sense of purpose I hadn’t felt in either of my previous books. But there were days during the writing of First Person Shooter when I was a mess, weeping at the kitchen table as I tried to write the experience of stuttering as honestly and evocatively as I could.

You have to dig deep to find positives in relation to stuttering. But I believe that having a stutter helped develop my capacity to write dialogue. This may seem counter-intuitive, but it works like this: whether you are a person who stutters or not, you probably come away from certain encounters and conversations wishing you’d said this or that. And you probably reconstruct those conversations in your head. I did this too. Constantly. From the age of eight, for literally hours each day, I’d play and replay the things I should’ve said in every social situation I found myself. I’d create whole conversations in my head, with multiple actors and shifts in argument and mood. Incessantly. There’s probably no better training for developing the brain’s dialogue-writing ‘muscle’.

This is probably why most of my stories start off as film scripts. Sometimes it’s almost as if the characters I create come to life in my head, talking and arguing and doing things, and I’m just taking notes as they do so. I’m often surprised by the directions my characters take me, and the things they say and do. When this happens, writing is an absolute joy and exhilaration. First Person Shooter is the novel I was born to write. Enjoy.

First Person Shooter is released by MidnightSun Publishing in February. Here’s the blurb:

Jayden lives with his father on the edge of the great Australian ugliness of small towns.

He stutters and is addicted to playing video games as a first person shooter. His best friend is Shannon, the girl next door, who knows how to handle a rifle. When Shannon’s mother returns home from a six-year prison sentence, the town waits to see whether her sociopathic stepson will exact revenge for the manslaughter of his father. Will it be left to Jayden to stop him?